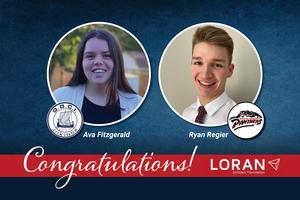 Ava Fitzgerald of GDCI and Ryan Regier of SHDHS were selected as Loran Scholarship finalists this year, each receiving an award valued at up to $100,000 over four years

The Loran Scholarship is “the country’s largest and most comprehensive four-year undergraduate award (valued at $100,000).” It was offered to 36 Canadian scholars this year “on the basis of character, service and the promise of leadership.”

The Loran Scholars Foundation was “the first national organization in Canada” to award scholarships based not only on academic achievement but also extracurricular activity and leadership potential. It is an investment into the future of students with potential, rather than a reward for past achievements.

Ava Fitzgerald (GDCI) was at home when she received an email from Loran asking her to call them to discuss her finalist award. Thinking there was a problem, she called as soon as she could. “Heather [Spratt, Vice-President of External Relations] asked me if I wanted to be a Loran scholar and all I could say was yes! I asked multiple times if she was serious, and said thank you more times than I can count.”

After hanging up, Ava ran upstairs to tell her parents. “We hugged and my family gave me a muffin with a candle in it – it was the closest thing we had to cake in the house.” She says finding out “...was thrilling, truly one of the best moments in my life.”

Ava attended Goderich Public School and is finishing her secondary education at Goderich District Collegiate Institute. She describes herself as “a very busy person most of the time.” When she’s not in class or doing her school work, you might find her playing ringuette or softball, or practicing for a track and field meet. Or she’ll be on stage with the jazz band, or meeting with the OSAID team or the science olympics team or the eco-club. She has also held part-time jobs and volunteer positions throughout her secondary career.

In any free moments between these many commitments, Ava enjoys reading, playing music, doing Origami, and baking.

When asked if there was anyone she would like to shout out to for helping to point her toward this achievement, Ava mentions the Ontario Science Centre Science School. “I got to attend this program in Toronto for 5 months during Grade 12 and it really helped me grow as a person and as a student.” She goes on to say, “I would also like to thank all of the teachers who give up their own time to host clubs, bands, sports, and academic support sessions. You make school fun, and build students into better people.”

In his third period calculus class on March 11, 2022, Ryan Regier (SHDHS) was so focused on his lesson that he didn’t notice his phone vibrating. When he finished his math question, he looked at his phone and realized he’d missed a call with a 416 area code. He had a feeling he knew what the call was about, and stepped out into the hallway to return the call.

“All I remember is the lady on the phone saying ‘Ryan, thank you for calling me back. I am happy to let you know that we have some very good news for you,’ and after those words, I just was mind blown. I found out what it truly was like to be speechless. I was not able to say much more than ‘thank you’ and ‘thanks so much’ over and over again.”

Ryan’s family lives on a farm between Exeter and Grand Bend. He went to Our Lady of Mount Carmel Catholic Elementary School in Mount Carmel, and is now a student in his final year at South Huron District High School in Exeter.

Much like Ava, Ryan says, “People would describe me as an extremely busy guy.” He tries to stay active whenever possible, usually with hockey, cross-country running and badminton both in and out of school. He sits on local United Way committees. He volunteers with various organizations, including the MS Society of Canada, South Huron Minor Hockey, and Axis Hockey Systems.

Ryan co-founded Eco Exeter, a community-wide ecological initiative born at SHDHS. He is the current president of that group, and a member and former president of the SHDHS Student Council. In between his many commitments, Ryan likes to spend time with family and friends, create woodworking projects, and cheer for Toronto sports teams.

There are a few teachers that Ryan would like to recognize as being “instrumental to [his] success.” One is Mrs. Amanda Keller, Eco Exeter founder and advisor, who, Ryan says, “allowed me to broaden my interests and make a community-wide impact in an area I am passionate about.” Another is Mr. Ryan Soldan, teacher of the SHDHS leadership course and Ryan’s school hockey coach in grades 9, 10, and 12. In these programs with Mr. Soldan, Ryan says he was “relied upon as a leader as well as challenged to grow and adapt” in his leadership. And finally, Ryan mentions Mrs. Katie Grant, advisor of the SHDHS Student Council, who, he says, “provided me the opportunity to connect with [the] student body and display my leadership potential from the day I started at SHDHS.”

Ryan is considering Western University and Queen’s University, among other schools, and plans to study business.

Congratulations on this amazing achievement, Ava and Ryan! We are so proud of you and your accomplishments, and we have no doubt that your futures will be bright!