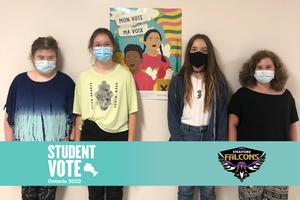 Civic engagement is alive and well among a group of Grade 7 and 8 students who hope to educate and inspire their co-students about democracy in Canada.

Four Grade 7 and 8 students at Stratford Intermediate School have taken on the task of organizing, promoting, and facilitating a Student Vote to coincide with the June 2 Ontario provincial election.

Grade 8 student Grace Herman and Grade 7 students Evora Meszaros, Freya Inglis-Eickmeier, and Jenna Jacobs, with the guidance and support of staff advisor Jessica Leney, believe that “organizing a student vote is important so students can learn about democracy.” They also believe that “it’s important that students have their voice heard.”

On June 2, each Stratford Intermediate class will participate in an in-person voting process at the school. The Student Vote group will facilitate this event and later tabulate the ballots. Leading up to election day, classes are encouraged to review and discuss a presentation the group has prepared, which introduces the parties and candidates involved in this election.

The Ontario Student Vote is an initiative in which any school can participate. Organized by CIVIX, a non-partisan registered charity, the Student Vote program is “​​dedicated to building the skills and habits of active and informed citizenship among young Canadians.”

This group of Stratford Intermediate students is certainly well on its way to becoming actively informed citizens. Grace believes democracy means it is important for citizens to have a say in how their country operates, and that “leaders have a responsibility to be accountable to the voters.”

The three students we spoke to predicted that the next Ontario leaders might belong to the New Democratic Party, if only because of the sheer volume of orange signs they are seeing around Stratford. Grace noted that “the candidate for Liberal this year has a background in healthcare, which is especially vital in this time period with COVID, so that might garner some votes.”

Ms. Leney added that it was significant to this group of active young female citizens that both the Liberal and NDP candidates for the riding of Perth Wellington are women: “That’s something to recognize and celebrate from an Equity perspective.”

We asked these future leaders if they had any messages or advice for the AMDSB community ahead of the Ontario provincial election. They recommend doing your research on the different parties and what they stand for. Freya said, “Make sure to dive deep into each platform and try to read between the lines.” Evora added, “Choose what you want to choose, not what your family or friends do.”

For families, Ms. Leney suggested that parents prioritize talking to their kids about politics. “Kids are curious - they want to know. A lot has happened since our last election, and civic engagement at a family level is really important.”

All three students had thoughts for those who can legally participate in the June 2 election, especially those who may feel apathetic about the impact of their vote. Evora said, “Every single vote counts. Yours could be the deciding vote. You could also be one of thousands to help make a good government.”

And Grace gave this wise advice: “Voting is how you can show your political opinion. If you want to change things, then take it to the polls.”